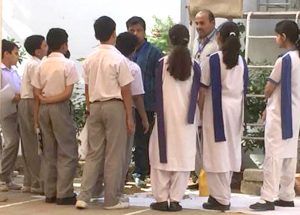 publications reach out to a larger public to keep them abreast of local, national and global happenings in the context of achievement and impediments to Food Sovereignty and Development Justice. Roots for Equity is a strong proponent of food sovereignty and believes that this framework is the most powerful collective response by small producers in demanding decent lives and livelihood. Roots for Equity’s main programmatic thrust is on achieving food sovereignty, a concept which demands inter generational production and consumption sustainability of society based on right to safe, healthy, nutritious, food, equitable distribution of resources, decent livelihood, and climate justice.

The issues faced in food and agriculture production are based in structural impediments: on one hand, inequitable distribution of resources especially land; and on the other hand, in the practice of industrial agriculture which relies heavily on the use of chemicals which overtime have proven extremely dangerous to health of all living beings as well as being ecologically destructive. Globally, more than 500 million people suffer from hunger; in Pakistan, the situation is no less alarming. Pakistani people, particularly our children in every province suffer from extremely high levels of malnourishment. For instance, key findings of National Nutrition Survey of 2011 are:

According to UNICEF’s Progress Report 2013 – 2015, Stop Stunting, in Pakistan 44 percent of children are stunted which is much higher than the global rate. This is the third highest percentage of stunted children in the world and means that more than 9.6 million Pakistani children have experienced chronic nutrition deprivation in uterus and/or during early childhood. 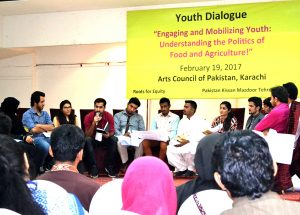 The Pakistan Agriculture Census, 2010 has shown that 45% of the land in the country is owned by only 11% big landlords; the remaining 55% land is owned by 89% small farmers. A majority of these 89% farmers have very little land ranging from 1-2 acres. In any case, the maximum landownership of these farmers is no more than 12.5 acres. It needs to be emphasized that this data does not include the millions of landless farmers who work as sharecroppers and agriculture labor. No doubt, the suffering of millions, especially the chronic state of hunger in women and children is due to this high state of landlessness.

If Pakistan has to overcome these crippling hurdles to attain a just and peaceful society, critical engagement of our young people is of utmost importance. The first step is for youth to understand the issues faced by society at large, in particular the most marginalized and vulnerable sections of society.

It is with this above situation in mind, in recent years, Roots for Equity has initiated a Youth Program with the aim of engaging, sensitizing and mobilizing young people and youth to be a critical player in achieving equitable patterns of production and consumption in the Pakistani society. Numerous activities have been initiated which include engaging school children, as well as college and university students and teachers from urban and rural areas in hands on-learning on sustainable agriculture production and consumption practices, as well as interactive dialogue to overcome the rural-urban divide, and achieving sustainable production and consumption as a way forward for a more balanced equitable cohesive society.

The Youth Interactive Dialogue addresses the following key areas of food and agriculture:

The model developed for the interactive dialogue is based on short introduction to each of the above areas to small group (7-9) of youth, allowing them enough time to assimilate basic issues, discuss among themselves and then present critical learning and if possible way forward.

As part of hands-on activities, the organization has formed trial farms that produce grains and vegetable seeds based on agro-ecological practices under the leadership of a mass-based small and landless farmers’ platform, the Pakistan Kissan Mazdoor Tehreek (PKMT). Roots for Equity, in it objective of attaining food sovereignty had helped in the formation of this 10-year old platform, as of course the most critical change agent will be small farmers themselves, who are in the front line of those facing the atrocious realities of the present inequitable production and consumption paradigm.