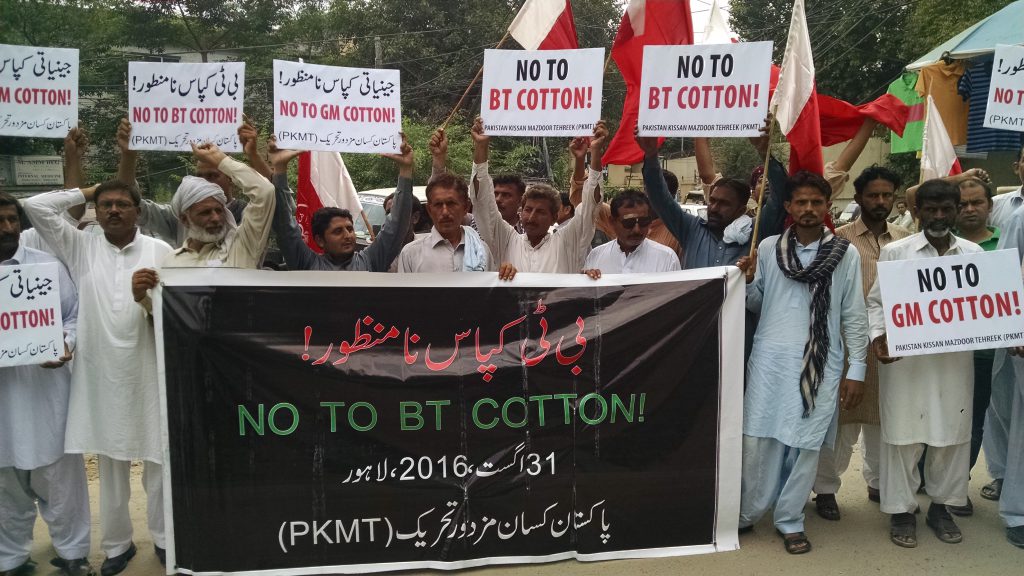 Pakistan Kissan Mazdoor Tehreek (PKMT) and Roots for Equity had organized a protest rejecting the promotion of Bt/GM in Punjab, Pakistan in front of Lahore Press Club. Farmers from various districts from Punjab participated in the protest.

Addressing to the protest PKMT secretary Wali Haider told that government is pursuing policies that advocate the production of genetically-engineered cotton; a policy which would ultimately allow hegemonic transnational seed companies such as Monsanto to take control and dictate the total agricultural cotton policy and production in the province, which surely will also spread to other provinces. The Amended Seed Act, 2015 has already been passed that was the first step in aggressively promoting hybrid and GM cotton; the next step is the passing of the Plant Breeders Rights Act, which is already in the final stage of approval in the National Assembly. All of these initiative are there to protect intellectual property rights of the TNCs in result Bt cotton business will have a legal cover.

PKMT firmly reasserts farmers collective right to seed, its free exchange among farmers; it is the farmers who have bred, preserved and passed on the genetic material of seed over many millennia and we will not allow profit-hungry corporations to control the most basic agricultural input – critical for maintaining life on our planet. The agro-chemical mega-corporations that thrive on ‘selling’ lies about higher yields has gained super profits while leaving farmers reeling under multi-pronged crises from suicidal debt, to ever-increasing cost of production, pests and super bugs infestation, falling yields, and destroyed lands and lives. Bt-cotton cultivation is a diabolical attack that will replace/reduce wheat production, the most critical food crop that ensures food security of the small and landless farmers.

According to PKMT National Coordinator Raja Mujeeb, Bt-cotton was initially illegally imported to Pakistan, has time and again wrecked havoc in the cotton fields of the country – last year’s very low cotton yields is testament. According to a research study by International Research on Cancer, Glysophate can probably cause cancer in human. This chemical is used extensively in Monsanto’s herbicide “Round-up Ready.”

PKMT Punjab coordinator, Zahoor Joya emphases that GM technology is being resisted by a vast number of countries across the World, including in very advanced countries such as France and Germany; in such an environment, where Pakistan does not have enough expertise to evaluate this technology, promotion of GM crops can result in many disasters impacting our environment, biodiversity, health and food security. The certified Monsanto seeds in India have already faced a failure creating havoc in the lives of farmers there. In this scenario, the Government must step back and put its efforts in promoting agroecological practices in the production of cotton which would yield high quality cotton. This has a vast market abroad and in the country and would ensure not only a livelihood for farmers but improve the health of the people and our agricultural land.

PKMT demands that instead of promoting TNCs interest and GM crops, the government must put a moratorium on GM technology so that national genetic resources, environment, biodiversity and most importantly right to seed for farmers can be protected. 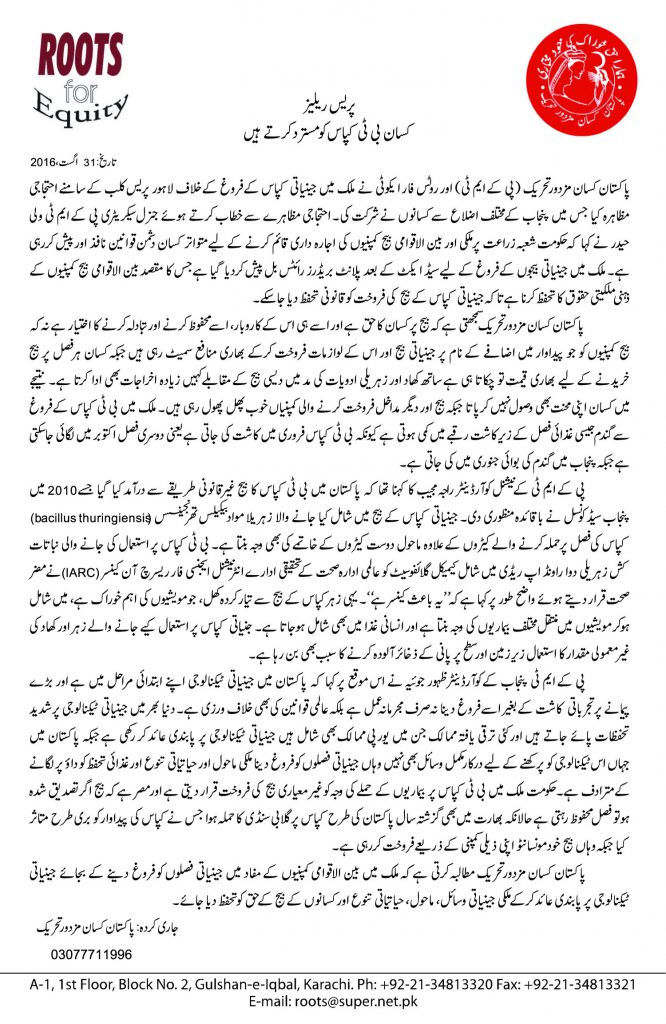 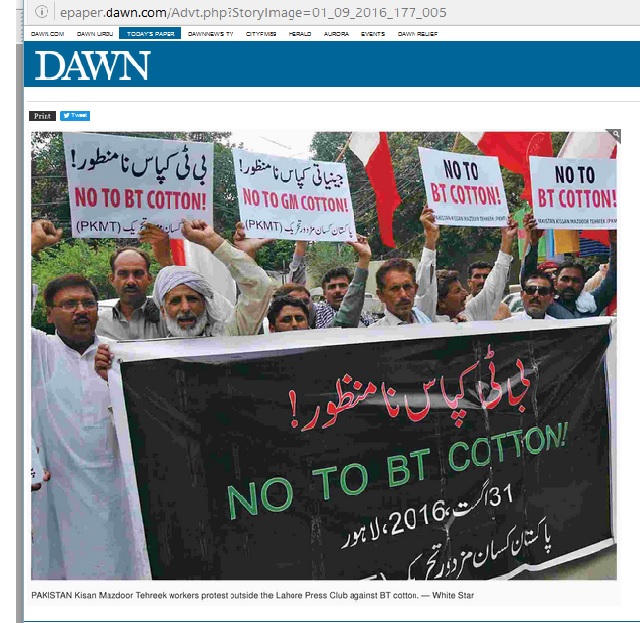 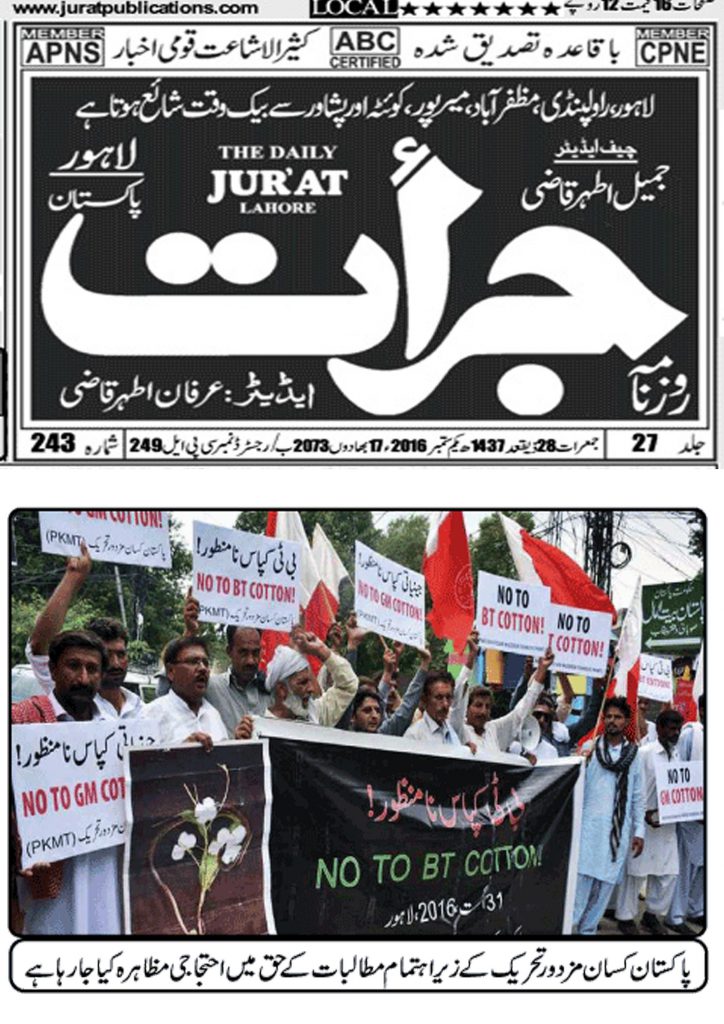 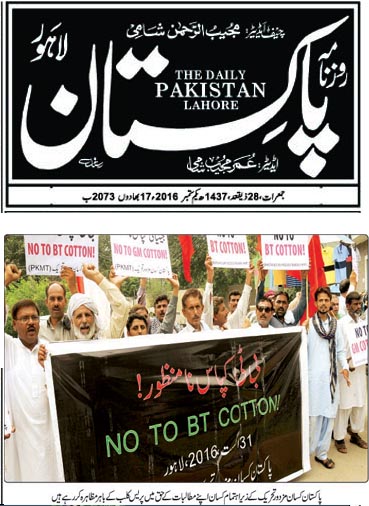